I AM CLEAN, NOT PERFECT 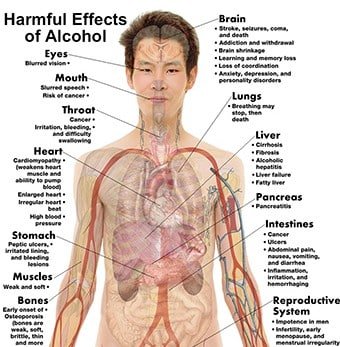 Alcohol affects every part of the body. Alcohol addiction makes the damage worse. Fear of suffering or death too does not make the person stop, revealing the inability to do so , thereby highlighting the nature of the disease of addiction. The solution to arrest it is treatment in an alcohol rehab where in one experiences living and celebrating life beyond alcohol.

Talking about the top of the head– Hair loss and male pattern baldness increases
Skin – can have eczema, psoriasis etc.
Heart– makes one prone to hypertension , cardiomyopathy [ disease of the muscles of the heart], coronary artery disease etc.
Lungs – Excessive consumption of alcohol can cause a sudden inability to breathe resulting in Acute respiratory distress syndrome that can be fatal
Eyes– It causes blurring of vision on a short term basis. in the long term – weakness of the eye muscles
Effects on the tongue– causes inflammation of the lining of the mouth , causes inflammation of the tongue
Effects on the Oesophagus [ Food pipe]
Reflux of acid
There are tears in the lining of the oesophagus caused by erosion due to alcohol and retching and vomiting as a result of acute consumption of large quantities of alcohol resulting in bleeding .
Effects on Stomach
It affects digestion by affecting the release of acid and also causing shrinkage of the lining of stomach resulting in proneness to infections .Chronic consumption damages the stomach lining structurally causing gastritis and delayed digestion of food that might result in diarrhoea and malabsorption .
Liver-
The toll on the liver s very well known – it causes inflammation of the liver -alcoholic hepatitis, fatty liver, change in the liver structure-fibrosis and finally cirrhosis. In Cirrhosis the pressure in the circulation builds up in the liver and gastrointestinal system resulting in enlargement of vessels at the base of the food pipe causing vomiting of blood [hematemesis] and or enlargement of blood vessels in the anal region resulting in piles /hemorrhoids. Fluid fills in the abdomen [ascites] . The person thus suffers a lot. Eventually there is liver failure and the person can die. Without proper treatment of the alcohol addiction in an alcohol rehab facility,, the person suffering is still unable to stop drinking . When I was attached to a hospital, I had seen a patient diagnosed with cirrhosis who was addicted to alcohol . A year down the line he was reduced to a skeleton with an abdomen filled with fluid and ultimately died of liver failure. But even the fear of death could not stop him from drinking. He was just unable to. That is the nature of addiction.
Pancreas–
Alcohol damages the cellular structure of the pancreas resulting in two forms of inflammation of the pancreas- acute and chronic. there can be severe characteristic pain in the pit of the stomach radiating to the back with nausea and vomiting and elevated pancreatic enzymes.
Intestines
There is malabsorption of nutrients from the intestines as the alcohol affects the uptake of carbohydrates , and metabolism of fats and proteins.
In the large intestine excessive alcohol intake results in increased movements of the large intestine which explains the sudden diarrhoea that occur following this.
Alcoholism can also increase the body’s risk of cancer– of the mouth, food pipe, throat, liver , rectum and breast.
It affects fertility causing drastic reduction in sperm count and quality of sperms in males and lowered fertility in females.
It damages the immune system due to malnutrition that makes the body prone to contracting ailments easily like tuberculosis – this is seen in all socio economic classes.
Thus alcoholism is an all consuming ailment that requires expert care and attention at all fronts.

We at Anatta provide the medical expertise , psychological care and an ambience of unconditional acceptance , counseling and confidentiality in our Client specific Alternate Life Therapy Rehabilitation program .
X