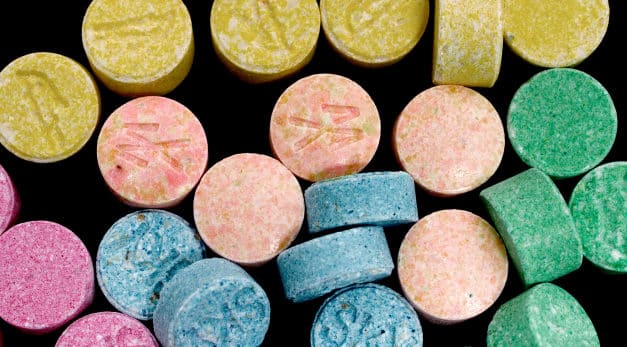 The rave and party drug that has taken the party scene by a storm for several decades.

it is available in Pill form – Ecstasy – which can however be adulterated by bath salts[cathionines]  or any other chemicals. It is called Molly for “molecular” available in capsule form but which can be mixed with bath salts again. It is also available in crystal form which is swallowed or dissolved in water and drunk . Powdered versions are also available  which are snorted.

it is a psychedelic drug with stimulant effects.

It affects three chemicals in the brain-

Norepinephrine- causes increase in heart rate and in blood pressure which can result even in a heart attack or a stroke.

Serotonin- MDMA causes the brain to secrete enormous amounts of serotonin and eventually this depletes the serotonin sources and reduces it considerably. Initially it causes one to feel all loving and caring, alters perceptions, heightens the senses. However,  soon it causes a very low dip or even depression and anxiety in the individual.

The effect of MDMA sets in within 30 to 60 minutes. In 3.5 to 4 hours it peaks followed by a plateau and then a depressive phase to stave off which a dose is popped again.

At times to enhance the psychedelic effects it is combined with LSD, Psilocybin mushrooms or Ketamine called as “flipping”. Also with marijuana and alcohol.

The person under influence becomes physically very active alert and hence it is used in rave parties where people dance non stop for the entire night and day . The music has a synergistic effect in enhancing the psychedelic effects. The mind becomes hyperactive. Thoughts run at a high speed.

In people who have myopia, with a high number, MDMA causes expansion of the eyeball which puts pressure on the retina . the small retinal capillaries might leak resulting in floaters in the line of vision. Retinal tears also might happen increasing the risk of loss of vision.

In people who have traits of ADHD, the use of this drug magnifies the effects.

In people with underlying anxiety and dependency issues, these symptoms get highlighted and last longer.

Thus depending on the frequency, duration, quantity of usage and the underlying personality traits, the duration of the effects also vary.

Over the course of the week following moderate use of the drug, a person may experience: irritability, impulsiveness and aggression, depression, sleep problems, anxiety, memory and attention problems, decreased appetite, decreased interest in and pleasure from sex

Chronic use results in depression anxiety and paranoea.

MDMA can cause increased body temperatures to abnormal levels so much so that it can lead to multi organ failure, heart failure and can prove fatal.

Residential care in an alternate life therapy center/drug rehab in an environment that is non judgmental, loving and accepting with counseling, meditation, yoga, writing and other alternate therapies is the path to a resolution.

We provide the same at Anatta Humanversity