DENIAL – THE STUMBLING BLOCK IN ADDICTION 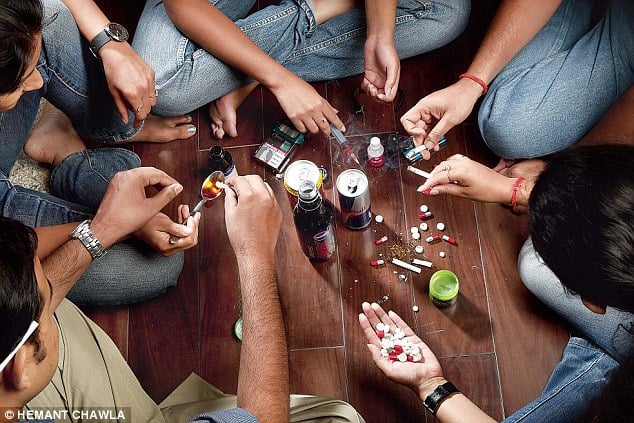 As the saying goes, “Cocaine is God’s way of telling you you’re making too much money.” This has been the swansong of the current party circuit in India.

We are witness to a generation that drinks to get sloshed drunk and high to get blown.

In most families across India  every celebration ,social do or function calls for popping the cork… Children grow up seeing the revelry of alcohol and more often than not one or both parents getting drunk. Thus alcohol is considered an inevitable and “normal” part of routine beverages consumed like water, tea coffee etc.  Where cigarettes used to be the macho thing to do at the threshold of adolescence today it is also Marijuana. A young man I know said ,”  pot is now legal in certain parts of the world it is not addictive…all my friends use it, it is fun so I enjoy it… “ little knowing that it is a stepping stone to an entire bouquet of illicit drugs and very addictive.

Where MDMA / ecstasy was the commonest party drug at a point, today Cocaine lines cut or crack or heroin are carried in trays and served to guests who would like to indulge at parties along with alcohol.

Ganja—refers to the leaves and stem, and is usually greenish in colour

Consumption- Bhang is usually eaten or mixed with a cold drink of milk and dry fruits. Hashish and ganja are crushed and mixed with tobacco. The mixture is rolled in a cigarette and smoked.

Effects of Marijuana on Body :

Extreme form of anxiety or fear

Lack of clear and orderly thought or behaviour

Peculiar herbal smell in hair, clothes, or in the area where the drug was consumed

Physical- one marijuana cigarette is equivalent to five tobacco cigarettes in terms of damage to the body. brain damage, infertility, and loss of memory.

Psychological- Amotivaitonal syndrome- the will to do something take responsibility, apathy, lethargy set in.

-the drug highlighted in the movie The Wolf of Wall Street is originally discovered by an Indian scientist in the 1950s. It was used medically as a substitute for barbiturates. However when one prevents falling sleep after eating it , it leads to a ‘epic’ high – Methaqualone, can cause serious emotional problems including depression, epilepsy, and delirium. 150-500 mg (not more than a therapeutic dose) can produce a sensual, euphoric state and a relaxed, intimate mood. It is highly addictive, and abrupt withdrawal, if not properly supervised, can cause death. According to the National Institute on Drug Abuse, Methaqualone is particularly dangerous when consumed with alcohol. Coma and convulsions can result from acute ingestion of 2 gm of  Methaqualone and death from 8 gm

Numbness of the fingers and toes

Death through cardiac or respiratory arrest.

The next part of this article will delve into other psychoactive drugs that are “in” on the party scene.

Nota bene- Einstein said, “Information is not knowledge”. Mere information will not help you identify drug abuse in your child/dear one. Consult professionals in the field of treatment of Addiction for assistance in drug abuse identification and intervention.

We at Anatta provide the right kind of professional help in this field maintaining the anonymity and confidentiality of  the clients.